57-year-old Samford resident Brett Lane is the very definition of trooper — not just because of the 20 years he spent in the Royal Australian Armoured Corps — but because he’s never ducked a tough challenge.

Mr Lane’s weight skyrocketed after discharging from the army, exacerbated by a series of hard knocks including a tough transition back to civilian life.

After a confronting doctor’s appointment last year, Mr Lane decided it was time to turn his life around.

“I was a 156kg pre-diabetic, my bloods were rubbish, and my mental health was getting worse as a result,” Mr Lane said.

“I checked my list of life goals and diabetes definitely was not one of them. I knew it was time to take my health seriously and I set myself the challenge of losing weight and getting fit again.”

Although it had been nearly 40 years since Mr Lane was a young Cavalry Trooper, and he had gone on to work in earthmoving, a string of serendipitous encounters saw him under the wing of his old Troop Sergeant once again.

“Over the years I kept bumping into my old Troop Sergeant, Al Noesgaard, but we didn’t really reconnect again until he saw on Facebook that I’d started riding an old hybrid bike to lose weight,” Mr Lane said.

“Turns out Al was a mad keen cyclist so he took me under his wing.

“So here we were 40 years later with the same man that taught me to be an effective Trooper, teaching me how to be a good cyclist.”

“I still weighed 140kg but by the time of Brisbane to Gold Coast I was down to 110kg,” Mr Lane said.

“When we got to the finish line I felt pretty good so Al and I decided to ride back to Beenleigh.

“This decision resulted in a in a very fitting 156km ride, 1km for every kilogram I weighed when I started on this adventure 14 months earlier.

“In 18 months I’ve lost 54kg, I no longer require blood pressure tablets, and my health continues to improve.”

“I’m still out training most days and this April we’re taking on the 110km Great Brisbane Bike Ride & Mt Coot-tha Challenge together — something I thought I’d never be able to achieve,” he said.

“If I can turn my life around like this, I hope that I can inspire others in the same situation.

“I’m now a regular rider who wears lycra sitting at my local coffee spot after training, I have a whole new support network, and in 2017 I’ve ridden just shy of 5000km.

Brett and Al will take on the Great Brisbane Bike Ride & Coot-tha Challenge on April 29.

The Bicycle Queensland event is for people of all ages and fitness levels, with three course options – 110km, 75km, and 40km – as well as a Family Fun Ride.

For more daring riders there will be an optional Mount Coot-tha Challenge — a timed 2.3km, 9 per cent climb, up Brisbane’s highest peak.

Set yourself a challenge and register today at https://gbbr.com.au/

For interviews and images

For more information go to www.bq.org.au 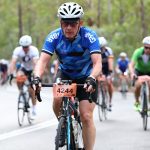 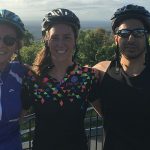 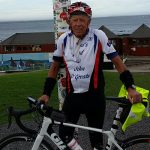 77 and taking on Brisbane’s highest peak 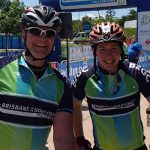 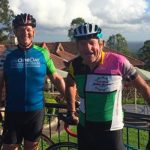 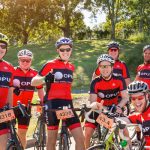 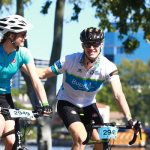